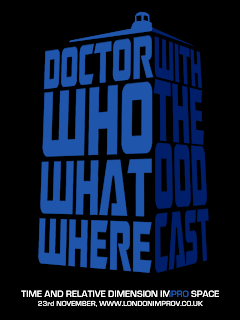 Tickets have just gone on sale for one of the biggest nights of this London Improv season. Get them quick!... here's why:

On 23rd November, Whovians (that's Doctor Who geeks to you) celebrate Doctor Who Day; the anniversary of the first ever airing of Doctor Who back in 1963. We at London Improv are going to join them, because the doctor solves problems without the use of violence and improvisers like to do that too. Yep, that's the link we're going for.

Join us for a Doctor Who themed improv and comedy night. Opening with an hour of improvisation from some of the best Whovian/Improv crossover folk around. Including a surprise cast member from Series 6 of actual Doctor Who, from the telly, which is pretty lovely/ace. As well as that, the cast looks like something a bit over-exciting:
feat. Michael Legge (BBC 6MUSIC), Gemma Arrowsmith (Little Howards Big Question), Dylan Emery (Showstoppers), Adam Meggido (Showstoppers) and more...

Then we will welcome very special guests: Chris Alpha, Chris Sigma, Laura and Handy Andy from the hugely successful cult podcast The Ood Cast, the most innovative, weird and engaging Doctor Who themed podcast on the internet. Just ask the folks at Radio Rassilon, eh?... Eh?!

And.. well, basically, The Ood Cast have a massive fanbase so if you want to come and see something really special, you should click on that link and get yourself some tickets quickly. Those Whovian fans have been practically banging at the door and trying to get in for the last week.

It's really going to be brilliant. Like, a lot.

And with proceeds going to Cancer Research in memory of veteran Doctor Who actor Elizabeth Sladen, you'll being doing something nice for something nice, too. Aren't you nice?

Email ThisBlogThis!Share to TwitterShare to FacebookShare to Pinterest
Labels: gig 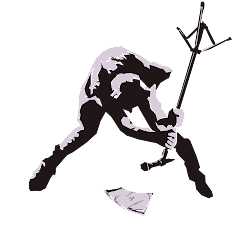